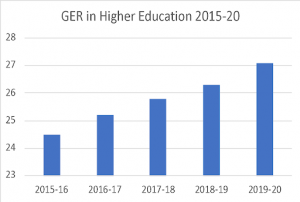 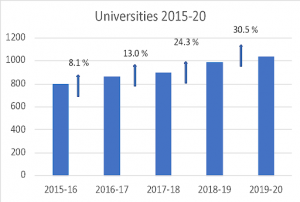 India has a strong focus on science and technology with vast research and development infrastructure. It is the third-largest scientific and technical manpower pool globally with many world-class, internationally ranked universities awarding over 40000 doctorates annually. India has emerged as the world’s third-largest publisher of science and engineering articles, with about 1,35,788 scientific papers published. As per the Employability rankings 2020, India is the 15th most employable country in the world.

Indian Institute of Technology Delhi (IIT Delhi) is one of the Twenty Three IITs created to be Centres of Excellence for higher education, research and training in various programmes of science, engineering and technology in India. IIT Delhi is ranked 3rd overall and 2nd in the Engineering category in the National Institutional Rankings Framework (NIRF) for 2020 and 193rd in the QS World University Rankings for 2021. In the Asian region, the Indian Institute of Technology Delhi is ranked 43 by QS and ranked 47 by Timer Higher Education. IIT Delhi was designated by the Ministry of Education to serve as the National Coordinator in its two flagship programmes, the Prime Minister’s Research Fellowship (PMRF) programme and the ASEAN-PhD Programme. IIT Delhi is the most employable institute in India, which has attained the 27th rank worldwide. Since its inception, more than 50000 have graduated with PhD, MTech, MS and BTech degrees from IIT Delhi in various disciplines, including Engineering, Physical Sciences, Management and Humanities & Social Sciences. These alumni today work as scientists, technologists, business managers, administrators, politicians and entrepreneurs. 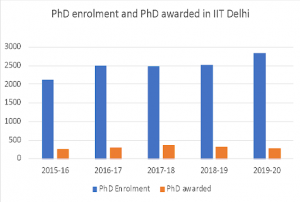 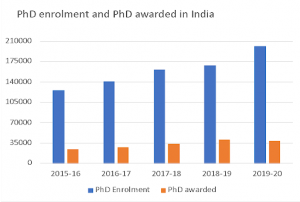 Recognised worldwide as a leader in the field of engineering education and research, nearly 6000 students received PhD degrees from IIT Delhi over the last five decades. Enrolment for PhD programme and PhD awarded in India and at IIT Delhi for the last five years are shown in the bar diagram.

IIT Delhi is focused on enhancing the quality of its academic and research output. It has created a pool of high-end central research facilities with open access to its entire research community and world-class experimental facilities. To enhance research in higher learning technologies and enrich its educational programmes, IIT Delhi has also built links with peer universities and institutes, both at the national and international levels.